Shaun Johnson, 67, is the first ski coach from Benzie Central to be in the Hall of Fame. He joins a short list of ski coaches from northern Michigan who have made it on the list since MHSSCA was founded in 1988.

“It’s humbling,” said Johnson. “The group of coaches who vote on this are friends and peers who work really hard – we all do, just a lot of frozen nights out there. Ski racing and the community that surrounds has always been a part of me and close to my heart.”

Following in the footsteps of his father, Johnson is a retired middle school teacher and ski racing coach at Benzie Central. His father, Ed, taught in room 222 (Shaun later taught in 111) when he started the ski club which turned into the Benzie Central Ski Team in 1972. Shaun was one of the first members of that team along with kids from the Papineau and Petritz families.

“Mimi [Petritz] was on my dad’s team in 78 or 79 and is the only state champion we’ve ever had from the Benzie Ski Racing Team,” said Johnson. “Peter Papineau was the first to compete in the state championship as part of our Benzie team on this day [March 19] 50 years ago.”

Scott Papineau, Peter Papineau’s nephew and former Benzie Ski Boosters treasurer, presented Johnson with the MHSSCA Hall of Fame plaque this past Saturday at Crystal Mountain. He pointed out some of the highlights of Johnson’s career, including taking eight teams and several individuals to the state championship as head coach of the Benzie Central Ski Team between 1997 and 2016.

Johnson helped facilitate the merger of Benzie Central and Frankfort ski teams, which has been referred to as the Benzie-Frankfort Ski Team now for more than 15 years.

“To me this award isn’t so much about the accolades, because we didn’t win championships,” said Johnson. “It’s always been about the community for me, and getting athletes hooked on snow sports early on so they can continue to race at the high school level and beyond. It’s one of the reasons I am still coaching the middle school team for Crystal Community Ski Club.”

Johnson has been a part of Crystal Mountain since 1972 when he painted chairlifts on Cheers in exchange for a season pass at 17-years-old. Eventually, he became part of the ski racing department, and now continues his ties to Crystal as the announcer for NASTAR, slush cup, kayaks on the snow, as well as head coach of the CCSC middle school ski team.

“At the end of the day, Shaun embodies the heart and soul of Crystal Mountain – a person who cares deeply about our community and who generously shares his passion and knowledge to inspire future generations of snow sports enthusiasts,” said Crystal Mountain President Chris MacInnes.

With Johnson’s induction, there is now a coach from every ski team who primarily trains at Crystal Mountain in the MHSSCA Hall of Fame: 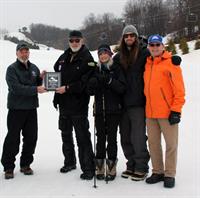